Death is tough for the living, and those who mourn do all sorts of odd things to cope with it. Some keep mementos, some build towering statues, others create memorial paintings or write sad songs, all of which are healthy in moderation. Honoring the dead has been around for so long, it's part of what makes us human. Recently, the practice of memorializing the dead has spread from the arts, religion, and ceremonial burial to video games.

Jon 'Neverdie' Jacobs (above, in real and avatar form), the biggest name in the virtual worlds of Entropia Universe, has had a fantastically interesting life. We're going to limit our discussion of him today to his relationship with his deceased fiance and mother of his child, Tina Leiu (pictured below), their relationship to Entropia, and how Jacobs has kept her alive in the virtual world through the medium of video games. 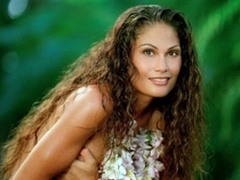 The two met in the '90s, fell in love, and in early 2000, began to fanatically play Entropia, a game-developement system developed by Swedish company Mindark. The game features several planets, each of which is a self-contained, independently developed, fairly standard MMO. Real world money can be traded for Entropia currency and vice versa, meaning it is possible to make or lose a great deal of real money in the game. Planet Calypso is the original planet, and was the only one for a long time. Jacobs and Neverdie, his avatar, are big names there, having been involved in game transactions using real world money valued at hundred of thousands of dollars, enough to get him into the Guinness Book of World Records—(the hottest nightclub in the game world is called Club Neverdie for a reason). Island Girl, as Leiu called her avatar, was there throughout, helping him along and inspiring him to write the song "My Girl is a Gamer Chick".

The two were constant virtual and real world companions. They had a son together and were engaged to be married. But in 2003, Leiu got sick suddenly, and died in '05 at age 40. Jacobs took the death as hard as any man deep in love would. One of the ways he initially dealt with the grief was playing as her character in Entropia, but Mindark has a one-person-one-avatar rule and he was asked to stop. Jacobs complied, but it bothered him that he had to, and he wanted to bring her back into into his virtual world.

In late 2010, Jacobs and many collaborators developed and released their own Entropia Universe Planet called Next Island. One of the landmarks in this virtual world is the spa where players die in battle respawn. The NPC proprietor of the resurrection spa is none other than Island Girl (pictured below), redone to look more like the real-life Leiu than the wolf-like persona she played with. After five years, Jacobs had finally found a way to make his late love a permanent part of their virtual world, honoring her in the virtual setting that meant a great deal to both of them.

Art has long been one of the most popular and honorific ways of remembering the dead. Paintings, movies, and songs have been created to honor the dead loves of nearly every famous creative person who ever lived. Whether you consider video games art or not, they take the idea of honoring the dead with imagery to a whole new level. They allow people to create memorials that can walk, talk, and gesture, and do so spontaneously to the extent that their AI permits. An NPC memorial seems like a natural means for grieving and honoring the dead.

Even after few years EU dont stop to impress me, same as ppl who play that "game", was wondering why this one revive is made as NPC and not same as all others... U have my respect for this ND...