Dungeon Defenders is the most exciting craft game on the Fall 2011 release schedule. I got a chance to play it at PAX in August and interviewed developers Trendy Entertainment last month. After more than a year of publishing difficulty and delay, the game finally came out on PSN, XBLA and Steam. I put about 20 hours into the XBLA version over the past weekend, beating all the campaign maps and racking up a huge pile of in-game money. It is not a perfect game. But it is a huge, challenging, and beautiful one; a game that defies one's expectations of what a $15 release can be.

At the most basic level, Dungeon Defenders is a 3rd person 3D tower defense/action-RPG hybrid. The graphics are charimingly done with the all powerful and ubiquitous Unreal Engine 3, but in a much more cartoony and vibrantly colorful style than many other games made with it. The game makes particularly good use of colored lighting, which affects the appearance of everything around it in impressively dynamic and appealing ways (below). 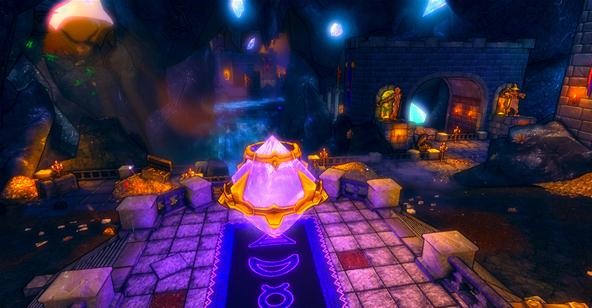 Players control a team of four diminutive heroes tasked with protecting magical crystals from increasingly powerful waves of enemy troops. Each map has at least one crystal (above), and at least one door from which enemies emerge. Each player controls one of four distinct hero classes at a time, but can switch between waves. Each of these can construct different types of towers and other defensive emplacements to protect the crystal automatically—in addition to using distinct weapons and special abilities to slay enemy beasties themselves.

There have been games that generally fit the description before. But Dungeon Defenders uses superb online multiplayer and deep RPG mechanics to elevate the tower defense formula into hitherto unexplored territory.

Fortunately, Trendy clearly planned for Dungeon Defenders to be a multiplayer experience from the ground up, and have done a great job of making playing with others easy and functional. There's four player local and online drop-in-drop-out multiplayer, with the seldom seen and much yearned for option of having multiple local players play online together at once, at least on Xbox 360. As one of my fellow journalist and teammates said during a match, it's amazing that a convenient feature like drop-in-drop-out that was as common as clay in the 16-bit days has become a special treat in modern games.

I've spent a lot of time playing by myself, with one friend locally, and with parties of three and four online. Far and away, the best way to play this game is in a full four-man team online. That's enough people to effectively cover all the major choke points, repair all your defenses, and slaughter the legions of enemies involved with winning a large map on the higher difficulty settings.

Having multiple members of an online party playing together locally does present one problem: unless each local player has their own XBLA account, only of of them can use a headset to chat with their teammates. And communication in this game is essential to coordinate where to place defenses, who is going to guard what, and scream for help when the enemies all-but-inevitably break through some part of your team's perimeter and come storming straight at the now largely undefended crystals. When such a disaster has been successfully averted, when all your strategies and teamwork have paid off in conquering a hard map on a hard difficulty, Dungeon Defenders offers some of the greatest feelings of triumph I've gotten from a game in a long time.

And then there's the other half of the game: action-RPG elements. Combat between players and enemies plays out much like in Zelda or Diablo—one button attacks with a character's equipped weapon in real time while others control their various special abilities. The controls are intuitive and functional, to the point where I almost never thought about them while playing. Killing enemies and completing maps net experience points, which are predictably used to gain levels and improve a character's combat performance in a wide variety of ways.

During any given level, enemies and treasure chests will frequently drop both Mana, the in-game currency used to purchase better equipment and pets, and piles of loot in the form of weapons and armor. There are untold millions of different randomized loots that can drop, and each one can be customized by spending Mana to upgrade it. Having the right equipment for a given map is almost as important, if not more so, than being at a high enough level for it, so managing all that gear effectively is vital. Teams sometimes collect more than 100 items in a single map, so sorting through them to determine which to keep and which to sell can be tedious at times. But finding the right combination of gear and watching your character's power skyrocket produces a very satisfying feeling of intelligence and superiority.

The most intriguing type of item on display is the wide variety of pets players can own. These are mostly either purchased from the in-game store, or earned by completing various objectives. When equipped they fly near the player, attacking their enemies and conferring statistical advantages while looking positively adorable. These too can be upgraded like items, and pets grow larger and more impressive the more upgraded they are. Fully upgrading a pet or piece of equipment gives the player the opportunity to name their creation and puts a "forged by (your name here)" tag on its info screen, so that even when or if you trade your creation to another player, it will still bear your mark upon it and spread word of your genius throughout the game world.

Clearly, I think pretty highly of Dungeon Defenders. It's my favorite of 2011 so far; I've certainly sunk more time into it over a shorter period than any other game this year. But there are some small problems.

First, Dungeon Defenders is a much more hardcore, challenging game than its visual style and tower defense roots might suggest. If you stop paying attention to your tactics and managing all the things happening simultaneously on a large map for even a short time, the baddies will destroy you and your crystals with brutal efficiency. The inventory management system, like I said before, is labyrinthine and appealing to hardcore players but probably off-putting to those who don't enjoy the secondhand armor salesman aspect of RPG gameplay.

For me, a gamer through and through, I can't imagine a more satisfying gameplay experience than beating a particularly hard level in this game along with a team of three other players I respect. There is a true fist-pumping, leap-from-the-couch feeling at the end of nearly every level one completes. Not many games can inspire that feeling, and among $15 dollar titles, they can be counted on one hand. It's also a long game for the price: after 20 hours I've barely finished the campaign on Medium difficulty and still have so much to do and so much enthusiasm for doing it, I can't see myself giving up playing anytime soon.

Dungeon Defenders, along with the aforementioned handful of full-scale fantastic indie games of the last two years or so, have greatly raised the standards for indie games. These games have the epic scale and hardcore gameplay of a AAA title, and are starting to make AAA game companies charging $60 for their wares seem kind of ridiculous. Dungeon Defenders costs only $15, and it's the best game of 2011 thus far. Get it. Now.

Looks great from the trailer, a little to much colour I must say.
Dane, Jocuri Online