This week's review roundup is a diverse lot. They really only have two things in common—their indie origins and puzzle elements. Otherwise, they come from France, Spain and the U.S., a few from unknown designers and one by the guy who inspired Minecraft.

French indie designer Etienne Perin is no stranger to odd puzzle games. His debut game was the Steam released Magnetis, and just like that game, his latest effort Gauge is oozing with style, beautiful electronic music and difficult puzzling. 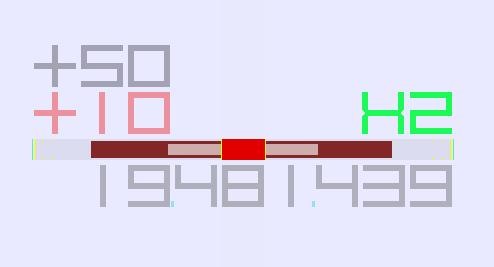 On the surface, gameplay could not be simpler. Players use the space bar to make bars move outward from the center of the screen and score points by keeping them as close to the barriers at the side of the screen as possible without touching them. Eventually, gold lines will emanate from the center of the screen, and touching these allows one to progress to other more challenging levels. Each level also introduces a new song, each of which is brilliant and integrates into what's going on in the game perfectly. The blocky graphics and musical nature of the experience remind me of Rez, but it's really not much like it at all.

This is the kind of tight, simple game that one person can really succeed making in the modern game development environment, and we hope Perin continues to make them.

On the opposite end of the indie game spectrum in many ways, we have Unepic. Spoof games have always been near and dear to my heart. The indie scene is rife with them, and Unepic ranks among the best. The dialog and simple cutscenes tell the hilarious and sharply written (even translated from its native Spanish) story of a gamer named Daniel who, perhaps under the influence of psychedelic drugs, stumbles into a video game world reminiscent of a classic castle from Castlevania. He must then fight and puzzle-solve his way out.

The gameplay is clearly influenced by the Metroidvania style, but contains more pronounced RPG elements than a typical Metroidvania game. It bears a stronger resemblance to the Blizzard-created SNES classic Blacktorne than anything else, especially visually.

The scope of Unepic is massive for something created mostly by a lone Spaniard named Francisco Téllez de Meneses in Barcelona, who needed help with art, testing, and translating the game's lengthy script into an impressive variety of languages. Even the game's purchase page is cleverly written in many tongues, with restaurant menu-style options for how much one wants to pay for the game. The cheapest option is 6.50 euros, pricey for an indie game, but Unepic is more than long and good enough to be worth the money.

American game designer Zachary Barth, who releases games under the banner Zachtronics Industries, might be the most influential indie game designer you've never heard of. He's created a whole mess of clever and intricate puzzle games over the last several years. Most notably, he brought the world Infiminer. This simple game of block construction and destruction with voxel graphics should look familiar to anyone who's played Minecraft because, well… Infiminer was the game that inspired Markus Persson (Notch) to make Minecraft in the first place.

SpaceChem is Barth's latest release and has found greater commercial success and general renown than any of his past works. It's a very complex puzzle game about applied chemistry.

Players must create reactions that will combine elements in complex, realistic ways into new materials, which chain into other reactions to make even more complex materials, and so on.

The intro levels might already be too complex for some, and the puzzles become positively labyrinthine by the end of the lengthy game. While it might not be as accessible as the games above, SpaceChem would be great fun for any chemistry geek with a liking for hardcore puzzles, and it could probably be a very useful tool for teaching this difficult science to a generation of game-crazy youths.