Last Thursday, on October 7th, indie game developers from around the world walked down a red carpet in Santa Monica, California in the hopes of winning an IndieCade award. We previously discussed the IndieCade festival and conference, but the award show is a smaller, more inclusive event that provides finalists the opportunity to see their project on stage with rewards by sponsors such as LG, who presented this year's ceremony.

As a guest at the event, I can tell you that it correctly captured the heart of the independent gaming community. Instead of musical performances throughout the show like one might see at the Grammys, team games were orchestrated by members of the local puzzle and games company, Wise Guys Events. Likewise, rather than having popular movie stars present each award, geek icons such as The Guild's Sandeep Parikh took the stage to open envelopes and announce winners.

While many great games won awards that night, the event's organizers deserve some recognition themselves for creating a ceremony that does not feel like a gimmicky shadow of award shows such as the Oscars or the Emmys.

Here's a rundown of what games won in each of the categories that evening.

Fez won the highest honor this year (creator Phil Fish pictured in the article thumbnail). The Grand Jury Award is given to a game that "cultivates artistry and embodies complete passion for game development." Fez is a unique platformer that challenges its players to think from different angles while playing in a 2D world. Fez is developed by the Polytron Corporation and beat out 35 other finalists for the honor. The game also earned the Story/World Design Award, sponsored by BBC Worldwide.

Hungry Hungry UFOs creators Asher Vollmer, Sam Farmer, and Ben Bharier were awarded the LG Mobile Innovative Game Award. The nominees in this category were all from part of the IndieCade 3D Mobile Game Jam, an event sponsored by LG Mobile.

The Audio Award went to Ed Key's Proteus, an open world game that allows you to explore various environments and enjoy the unique and distinct sounds of each area. 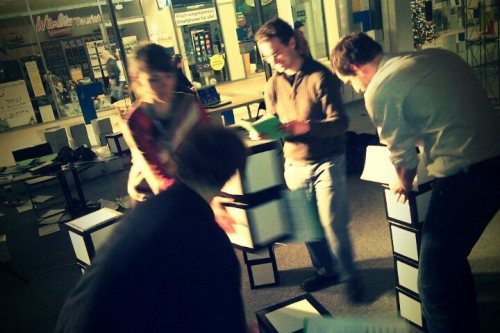 The Game Design Award was given to Deepak Fights Robots. The game's creator Tom Sennett describes it as "an arcade platformer inspired by the likes of Bubble Bobble, Donkey Kong, and Pac-Man."

The G4 sponsored Impact Award is provided to a game that has changed the way the rest of the industry looks at game creation. Johann Sebastion Joust by Douglas Wilson and Friends won the impact award, as well as the technology award at the ceremony. The game uses motion controllers and smart phones and requires a player to keep their controller still while their opponents (also holding controllers) try to bump or move it.

The Special Recognition Award is given to a game that stands out, but does not necessarily fit into the other categories at the show. Facepalm Games' The Swapper is a puzzle platformer that "features interesting puzzles and multiplayer based around never-before-seen game mechanics."

This year's Trailblazers Award went to Megan Gaiser, the CCSO of Her Interactive. Her Interactive creates mystery games for women and young girls, including the Nancy Drew franchise of PC games.

The Developers Choice Award went to Way, a cooperative game that forces two strangers to interact with each other to accomplish tasks, but limits them to body gestures as a means of communication. Way is created by Coco & Co.

The Audience Choice Award was given to The Depths to Which I Sink, created by Bigpants. The 3D game causes players to think past the flat screen in front of them and move through tubes, circles, and more.

Congrats to all of this year's award winners. Visit the official IndieCade press release for more information.

James A Tyler 10 years ago

A lot of these games look really cool. Any idea when they're coming out?