Game design is sedentary work. Generally its practitioners do their work with their butts planted securely in front of a computer in an office (be it home or away) as their muscles and verbal skills atrophy. Even game journalists are prone to this condition. Not so with Colin and Sarah Northway (pictured below), the husband and wife team behind NORTHWAY Games. Not only do they make really cool indie games, but they do it with just a laptop while traveling the world meeting indie developers of every stripe and writing about it on their blog Apes Abroad. 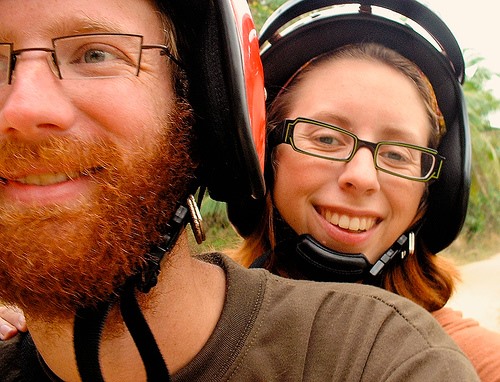 What brought my attention to this unique developer was Sarah Northway's most recent project, the free Flash game Rebuild 2, the sequel to Sarah's first indie release Rebuild. (Note: The pair work on their own games separately, helping each other when necessary.)

Rebuild 2 is a classic turn-based strategy game that one seldom sees anymore. Players control a lightly-customizable hero in a post-apocalyptic city filled with zombies. They must lead a ragtag group of survivors on a quest to reclaim the land. Recruiting new members, reclaiming buildings, scavengning for food, killing zombies, researching new technologies, and preserving morale are all constant concerns. Each survivor that one recruits has different talents, which can be developed with repetition of related tasks. Victory is achieved when the player's domain covers the required number of city blocks and they control the randomly placed City Hall building.

There are so many different building types, tasks to preform, and random events to deal with that Rebuild 2 feels vast for a Flash game, and the amount of care and time that went into it are evident in every well-written dialog window.

It reminds me in all the right ways of several classic turn-based games, namely X-Com: UFO Defense and Jagged Alliance. Both games had a strong emphasis on personnel management and emergent storytelling, just like Rebuild 2. The city management aspects are like a turn-based version of Constructor, the '90s slumlord simulator rife with random violent issues to resolve and random characters that developed meaning and became relatable through their in-games actions rather than a prewritten script.

Rebuild 2 also highlights one of the best attributes of turn-based games—addictiveness. One turn in such games is pretty short, and there isn't a defined end-point other than winning or losing the game. This leads to the thought "Just one more turn…" running through your head hundreds of times as your empire grows and your critical thinking skills get just a little bit sharper. One could play Rebuild 2 for a whole day without stopping. That's one of the nicest things somebody can say about a Flash game.

Colin Northway's debut game got the family game company off the ground, but I didn't like it as much. It's called Fantastic Contraption and is a very elegant physics puzzler, sort of like World of Goo meets The Incredible Machine. I'd like it more if I liked physics games more, which I don't. But the elegant simplicity of the design and the overall presentation are great.

His current project is called Incredipede, and its trailer looks pretty good.

Hopefully Incredipede, Rebuild 2, and all of NORTHWAY's future work will do well enough to allow them to continue to live their stereotype-defying lifestyle and continue to do better and better work in the indie game scene.

Damn. Sounds like the life. Wish them all the luck in their journeys/game creation.