And they've spent just as much time  with their much simpler, but fully completed physics platformer, Super Goblin War Machine.

Their newest endeavor is called Coffee Break Hero. It sets itself apart from the other games, not so much by the game itself, which has only been in development for four days, but by its unique execution. Big Block will be developing the entire game in 14 days, with a continuously updated playable build available on their website. That by itself is amazing and innovative. But Big Block have also turned Coffee Break Hero (which incidentally is a simple hack-and-slash RPG so far) into a charity drive for video game charity Child's Play. 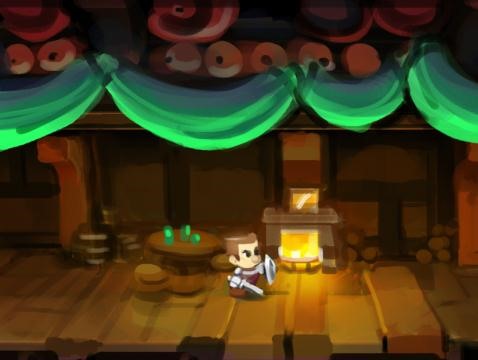 Throughout their fortnight-long development cycle, Big Block will be accepting donations to Child's Play through the game's website. Giving the gift of video games to sick children through the preeminent video game charity should be enough incentive to donate, but Big Block is offering their donors some nice benefits, including an enhanced DRM-free version of the game and the right to name in-game monsters for all who give. The top 100 donors also receive a free copy of Black Market, while the top 5 get custom in-game avatars. And the most generous gamer of all will be made a prominent in-game character.

As of this writing, the donation total is $2,470.65. A modest sum, but the event has only been going on for four days and Big Block isn't a well known developer. Their idea deserves the support of the gaming public though, and I would encourage all of you with the means to donate and monitor the progress of the game. Even if you don't feel able to donate, the frequently updated builds of the game are available to all and an informative insight into the day-to-day progression  of a game in development.