Hard drive space is one of the cheapest things you can add to your computer. But people take it for granted, thus game developers have given up any efforts in keeping games compact. With all of its expansion packs, World of Warcraft takes up more than 60 GB of hard drive space, and almost any AAA game consumes a gig or two.

One of the guys behind Gish just released a beta version of his new 3D multiplayer flight simulator game called A New Zero. How much disk space does it take up?

Yes... you read right. A real-time 3D flight sim with physics, multiplayer and strategy elements takes up less than 1/10,000th of the disk space WoW does. It accomplishes this amazing party trick by generating itself procedurally out of voxels when you start the game. Other games have done that with maps, but here the music (always a disk space hog) and character models are procedurally generated as well. Not having to store any of those things equals far less disk space required. And the graphics look outstanding, given how little code goes into creating them. For decades the most advanced 3D games looked no better than this. They might have been more colorful, if anything, but the stylized monochrome of the universe in A New Zero looks great.

At first, the gameplay is a little confusing and hard to get used to, but it's rewarding once you get the hang of it. Controlling an airplane with keyboard and mouse is especially tough; It took me three tries just to get the damn plane off the ground. Once aloft, one plays a sort of conquest game against the computer (or other players online) using a tiny arsenal of guns and a diversity of vehicles to accomplish a variety of tasks.

If you don't like games that are really easy and offer very little explanation, this is not the game for you. There does appear to be some actual depth to the game, thanks to research, trade and diplomacy systems that I didn't expect to find in a game this small and outwardly simple. And shooting stuff from planes is a pretty hard gameplay experience to mess up.

Whatever its faults are, it's utterly remarkable that one man could make a game this elaborate fit into just 1 MB of data. Consider it a backwards technological marvel. When the game is finished, it will likely include more of a tutorial and be more accessible (much of the menus and in-game text are awkwardly placed and tough to interpret at this point), so casual players should wait until then. But if you like old clunky flight sims and are feeling adventurous, you could probably have a lot of fun with this.

Plus, the voxel buildings look awesome when they blow up! 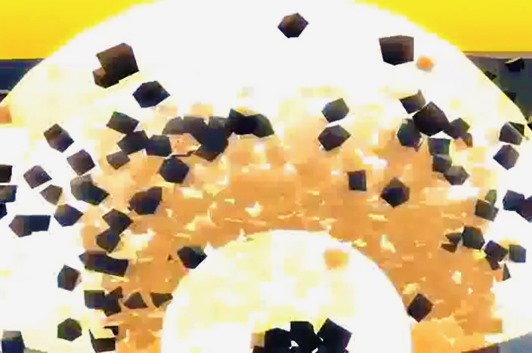 That's awesome. There used to be a competition where people would make 3d audio video type things that had to be really tiny, it was awesome. I'll try to dig it up again.

search for the game kkrieger. It is a FPS and is only 96kb and has awesome graphics!

Wow, I never knew small-format 3D was such a big thing. Awesome.