Foldit is definitely a niche game. The sole gameplay mechanic is attempting to fold complex proteins into smaller and more efficient shapes following the rules of molecular physics and biology. Points are awarded based on how small one can make the protein. Online leaderboards track players' relative progress and allows them to view and manipulate other players' completed designs. It's original, certainly, but no developer is going to ship a million units of a game about molecular-level protein manipulation.

They just might, however, be able to hamper the spread of HIV.

In a paper published this month in Nature Structure & Molecular Biology, a group of scientists led by Firas Khatib of the University of Washington, describe how Foldit players might have accomplished that feat. Retroviral Proteases are enzymes that are a key factor in HIV's transmission. For decades, scientists have been trying to determine the natural molecular structure of these enzymes so that their function can be combated more effectively. Determining the exact nature of that structure, however, requires careful and elaborate spatial manipulation of labyrinthine structures on a tiny scale. It was more than the limited manpower of academia could handle. Distributed computing software Rosetta@home wasn't up to the task either; it turns out that despite all their data processing, computers are terrible at spatial manipulation and reasoning. 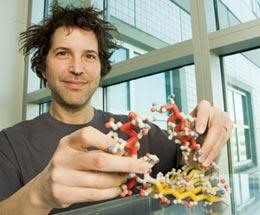 People do both of those things constantly in the process of doing just about everything. In 2005, one of the UW scientists involved in Rosetta@home's attempts to automatically determine the structure of proteins (David Baker, above, old-school folding) came to that realization and started modifying Rosetta to utilize not just peoples' idle computers, but their idle brains. NASA has been using a similar method to look for microscopic pieces of stardust in a collection of 1.6 million microscopic photos for much of that time as well.

Foldit was completed in 2008, and since then 236,000 registered users have helped its creators determine the shapes of proteins for fun and points. Once Khatib and his team released their retroviral protease puzzle (below) to this large and experienced community of protein twisters, they got a solution in only 10 days, and published it.

It could be quite some time before new drugs are made to take advantage of their findings. There are still plenty of other proteins for Foldit to decipher in the mean time, so its' devoted users (credited in the final paper as the Foldit Contenders Team, referring to a group of players instrumental in solving this particular problem) can still do a lot more good for the world than they already have. In a post-Watson world, it's also reassuring to know that there are at least some areas in which man can still outcompute machine. Hopefully that will allow us to stave off their inevitable enslavement of our species for a few more centuries.

This is just one more demonstration of what miraculous... life altering opportunities the internet is unfolding to human kind! the fact that brilliant minds can collaborate internationally, simultaneously is going to solve//cure/create so many great things! what a trip the age of wifi turning out to be!