Most kids who play video games will never become professional gamers. Those that do are part of a very select group— it's like being a professional actor or athlete. It's nice work if you can get it. For everyone else, the sad realization usually arrives sooner or later that time spent playing games might not have the practical rewards that homework or working hard at your job might deliver. 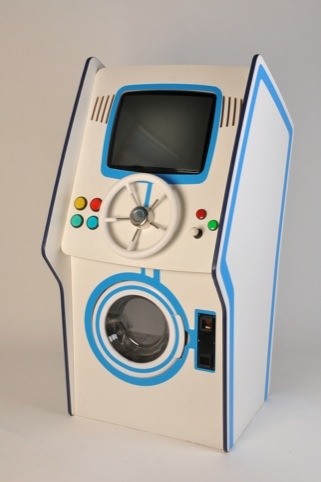 Kingston University London design student Lee Wei Chen has attempted to mollify those concerns with his new invention. It features the top half of an arcade machine mounted on top of a front-loading washing machine in one sleekly designed cabinet. Inserting coins will start both a load of laundry and the game. This is where those nascent arcade game skills will come in handy. The laundry cycle will only progress once in-game milestones have been cleared, or else the user has to insert more money for their load to finish. As 27-year-old Chen said of his device, "I realized that the skills I had developed in the virtual world were useless in the real world. I wanted to make them useful." 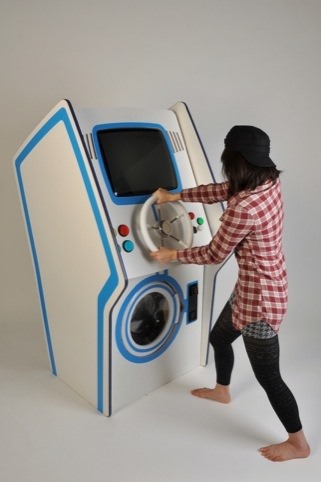 Finishing loads of laundry is indeed useful. Forcing non-gamer grannies to spend a week's worth of quarters on a single load while crying in the face of a R-Type III boss fight is less so. It's cruel, actually.

But all the same, Chen's idea does have some merit beyond arbitrarily shutting gamers out of public laundry society. Many laundromats house arcade machines as well. Combining arcade game and laundry machines into one unit will save space in such facilities, allowing laundromat owners to offer more entertainment options to their patrons and extract more precious quarters from them in return. 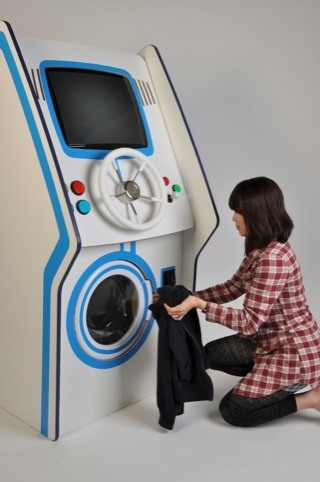 Really, just seeing a cool idea for an arcade cabinet is enough to excite me at this point. Arcade games have gone so far down the tubes in terms of innovation and relevance in the West, anything that reminds people they exist and has even a remote potential to get more of them into public places is a good thing. Even if it might cause some non-gaming families to look like troupes of Pigpens after spending two weeks trying to get a load done, with no money left for new clothes.

There is no pedal in that car, she is going to drive forever!

What ever happened to the question of the week?

Due to lack of participation, the weekly contest has been put on hold for the time being. Stay tuned.

Well open the competitions to your friendly members over here in the U.K.

It was open to one and all! And may be resurrected in the future if this outpouring of public support continues.

everytime i have clicked on a competition, the small print states "only residents of USA"