Every year at the big video game trade shows around the world, like E3 and gamescon, the big three console makers each do a hot-ticket exclusive press conference to let the media know what's coming for their system. Computer games have no such press conference. Who would give it if they did?

During his introduction of the PC Gaming in 2011-2012 press conference at PAX Prime yesterday,  Logan Decker, editor-in-chief of PC Gamer, said that PC games don't have their own press conferences because there is no one company that stands to fail if PC gaming fails. Neither Intel, Microsoft, nor Apple have enough skin in the PC game business to invest the time and money necessary to prepare and book one. This is a shame, since PC gaming is without a doubt the most cutting edge part of the industry.

So, PC Gamer has started staging their own 'by the press, for the press' PC press conference, which is as close to an official one as PC games are likely to get.

Overall, it was cool, but marred frequently by poor organization and technical problems. There were speeches by several high-up members of the PC Gamer staff, as well as game design luminaries from across the PC gaming world. The most famous was the lead-off man Notch, creator of Minecraft, who demoed the forthcoming Minecraft Adventure Update for his mega-indie game. Pictured below are the Endermen, a scary new enemy from the update. 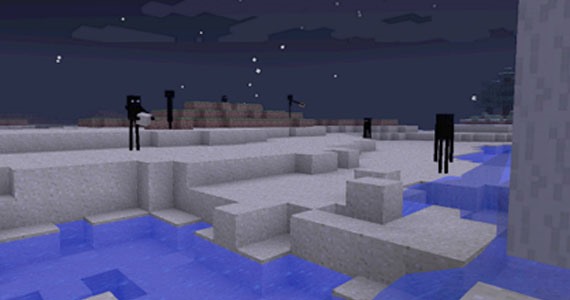 His company Mojang also announced a new game called Cobalt, their debut as a third-party publisher. The content from Mojang was the best part of the presentation, but the tech issues they faced were really distracting. It took more than 5 minutes to load Minecraft, a game with almost no system requirements. When he finally did get it running, it ran as smoothly as molasses flowing through cheesecloth. It was funny, and Notch made some good jokes, but it made the event feel very unprofessional right off the bat and nothing like the large press conference it was trying to emulate.

The rest of the presentation went smoothly, but also without as many exciting announcements. Sword of the Stars II, Firefall, Dragon Nest, Hawken, and Red Orchestra 2. The most exciting point came about halfway through when Decker announced PC Gamer Digital. It will be the first magazine distrubuted through Steam, and functions much more like an application than a magazine. It just might be revolutionary. All the announcements were PC exclusive, but none were particularly exciting and I wasn't wowed by any of the trailers. All in all, I'm glad I went out and supported the event, but didn't gain anything from it that I couldn't have gotten elsewhere.

It's great that PC gaming finally has an official press conference to match those thrown by Nintendo, Sony, and Microsoft. Unfortunately for both, the new annual event and the magazine that is putting it on, their time may have passed.

I agree wholeheartedly. I can't decide whether that or Sword of the Stars looked better, but they were my two clear favorites.

I've always viewed ventures that display console games far more interesting because everybody is developing on the same box and we get to really see the talent at work. PC gaming has always been different because there is no one "box" a developer works with but rather a vast assortment of equipment from a wide range of manufacturers. In fact I'm more inclined to say that console games are developed with current technology and PC games are developed for -future- technology; just take any game that Crytek produces for example. Those games, at max settings, are more of a benchmark tool rather than a gameplay experience. How can you really host an interesting show when PC developers have always done their own thing with no real reference point to gauge talent?

You clearly can't discern talent very well at all... So what if the hardware's more powerful? It's not about how well you use the hardware, it's about the end product.

I don't think that the majority of PC games should be compared on their technical prowess. A lot of the great things we're seeing come out for the PC in the last few years (and coming up) aren't about maxing out two overclocked video cards. Instead, they're about doing things you can't really replicate on the console side. Starcraft 2 and League of Legends spring to mind, but you can even look at Minecraft's initial success on the PC, or a game like Magicka. Heck, even Witcher 2 which will surely be used to benchmark video cards for some time was more about a compelling story and added RPG elements than it was about beautiful scenes.

While I'm not sure that a PC gaming convention would need to be about comparisons, if it was, it would likely be comparisons between the level of innovation we're seeing among the titles.