Video games are the most prevalent type of interactive media, but certainly not the only one. The interactive music video for the song "3 Dreams of Black" by supergroup ROME and digital artist Chris Milk utilizes the latest web design technology, video game influenced art and interactivity, and large crowd-sourced elements to form a compelling work of art.

ROME is composed of producer extraordinaire Danger Mouse, Italian film composer Daniele Luppi, Norah Jones, and Jack White. Their recent eponymous modern-Spaghetti-Western concept album has garnered as much positive buzz as you would expect from such a supergroup. The interactive video takes the aesthetic of the album and places it in a completely unexpected context. It combines pixel art with Sergio Leone aesthetics to create a completely innovative visual experience. It utilizes WebGL, a new type of HTML5-based script that allows for more complex 3D graphics to be displayed in-browser. Unfortunately, that also means that it can only be viewed using Google Chrome. 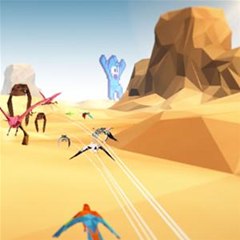 The video would be pretty amazing even if it was just a video. But the interactive elements come in two forms and take the project from being just a cool music video to a groundbreaking piece of art. Throughout much of the video, viewers can use their mouse to control the perspective of the camera and look at different parts of the beautiful digital landscapes. For the first two thirds of the video, this sometimes feels tacked-on, as if the best parts of the video are the parts right in front of you, and the camera movement simply distracts from them.

However, once the camera comes out of a tunnel into a vast desert full of professionally designed and user-generated sculptures made using a simple web app (vaguely Minecraft-esque), the interactivity comes into its own (see above). The camera slowly rises upwards with a flock of 3D birds that stays in front of them no matter which way you turn. Here, the freedom of control allows one to take in a different vista of the virtual sculpture garden every time. The music soars along with the camera, and the ability to control the scene imbues this music video with replay value, something that once could only be found in video games.

Click here to play it for yourself, preferably at least three times to see all of the multimedia awesomeness.

Images Courtesy of Short of the Week, FlashXMLwebsites.