The series started in 1995 in Japan, and has since gone through many iterations in its home country. There are only a few English language releases to choose from, however, and we will compare their merits here so you can decide which one to use to make your own RPG masterpiece.

Released in 2005, XP was the first modern version of RPG Maker. It is still widely used despite the presence of a newer version because it is the most open and customizable RPG Maker. Games made in it run at a higher resolution than any other in the series, meaning more cool stuff can be on-screen at once. It also was the first game in the series based on the Ruby programming language, making it much more powerful than its predecessors and capable of a wide variety of gameplay features. The presence of Ruby also means that XP is very extensible using Ruby scripts, which many users have made available in RPG Maker XP forums.

It only cost $20 on the RPG maker official website, $40 less than the newer RPG Maker VX.

RPG Maker VX is the most current version of RPG Maker, released in 2008 and available online for $60. It is much simpler and easier-to-use than its predecessor RPG Maker XP, improving the Ruby scripting system, raising the framerate from 40 to 60 fps for smoother graphics, and majorly improving the level-creation interface. 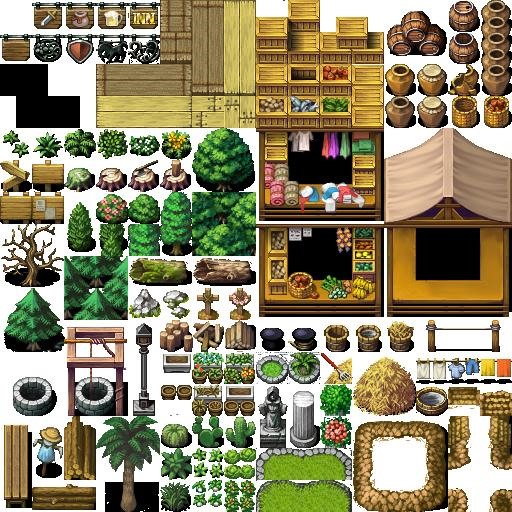 This ease of use comes at the cost of flexibility. Many users have complained that they can only use one tileset (a set of images used for making levels; sample shown above) for all of the tiles in an entire game, unlike in XP where users can load a tile set for each part of the game. This limits the range of visual environments users can include in an individual game, but many tilesets are so huge, that this shouldn't really matter to beginners.

Also, since VX is based on Ruby, it can also be extended and modified with scripts. This renders most of its problems moot, as long as you are willing to hunt around in the RPG Maker VX forums for the scripts you need. The forums users are generally helpful people, so asking for their advice is much easier than trying to work around these problems yourself.

That depends on what you want. If you want a program that will help you make a fun game quickly, with minimal (if any) programming experience, get VX. If you want more flexible, powerful software that is going to be harder to use (but also cheaper!) get XP. Both are great products and get better with the more effort you put into them. A great way to get started is to download the software of your choice and then download some completed games (like the ones above) from the aforementioned forums. They will give you a lot of good ideas for what to do and whom to contact for advice.

I acquired RPG Maker VX a couple of months ago, and am currently working on a historical RPG chronicling the story of Cem, an Ottoman prince and geopolitical chess piece from Renaissance times held hostage in style for decades by the Pope. Stay tuned for more news on that, until then, get to game-making!

Love the graphics on the rpg maker series. Any chance of these being easy to port to a cellphone/tablet format? it looks like these types of games would be the most successful on these platforms.

Actually your right, i have a few of RPG games of this style on my ipad and they work perfectly with the device, super easy and crazy fun if the story is half decent.

Not sure how that would would implementation-wise, but you're both right the genre really lends itself to iOS devices well. Simple graphics and controls overcome most iOS problems.

BTW two things. Firstly im guessing its only for PC?
Secondly, is there a way to edit an existing tileset and/or import a custom one?